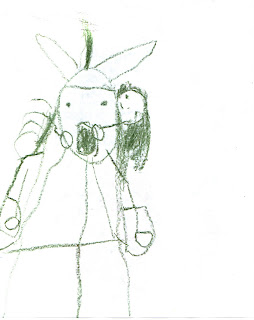 I haven't been sure how I would try to get back to posting stuff that wasn't Mike related; none of my drawings seemed to be the appropriate place to start back. Then the idea came to me while looking at one of Kaitlin's recent drawings that our kids literally are our future, and what better way to look into my future than by posting one of her drawings that brings a smile to my face. For those that can't tell, she's riding on a horse (or is it a unicorn?), while bending over to take a look out at us. I love the foreshortening, and the way she captured her hair, and her happy expression that she captured with just a few lines. It makes it easier to find hope again... at least for me.
Posted by Unknown at 9:53 AM 3 comments: 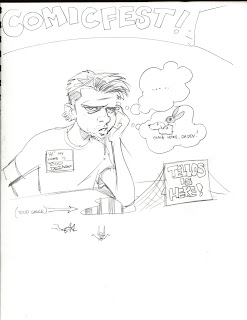 The way I remember it, Mike, Chuck, Dave Johnson and myself were flying up to a con in Chicago when for reasons beyond our comprehension, we had an unscheduled landing in Indianapolis (I think we later found out there was snow coming down in Chicago and a huge holding pattern and we didn't want to run out of fuel.) We sat on the tarmac in Indy for well over an hour, not allowed to exit the plane, knowing that we were going to be late for the opening of the show. I started sketching in my sketchbook while waiting (planes are great places to sketch btw) and Mike and I started joking about how Todd was already there at the show, waiting for us to show, bored out of his skull. Because, you know, there was no way Todd could be enjoying himself without us there... :)

Now, I believe this was just after Tellos first shipped, and I think maybe Mike had a bunch of copies he was bringing along to sell, (Todd- help me here...) which would explain why there aren't any copies of the book sitting there in the drawing. Anyway, Mike bummed my sketchbook, and while sitting there in the back of the plane, whipped this drawing up, complete with Todd's little buddies waiting for him at home. Mike even captured the way Todd drew his pets himself (not many know that Todd is a talented artist in his own right).

The explanation of the Todd Sauce is harder to explain. Somewhere along the line Mike and I started this stupid bit when Todd called that went something like "Still talking 'bout the Todd Sauce..." I don't know how we started that one, but like so many ridiculous expressions, Mike and I ran it into the ground. So, when Mike drew the drool in this pic, naturally it got the Todd Sauce label.

Todd's memory of this might be a tad different than mine...

The one other memorable part of this trip (I think it was the same trip) was that we met Sonny Shroyer, who played Enos on the Dukes of Hazzard show, in the back of the shuttle bus on the way back to the airport after the show. He told us some great stories about the show and Roscoe P. Coltrane (James Best) and we all got our picture taken with him before running off to catch our respective planes. Dave's got the picture to prove it, if we're lucky...

Such is the strangeness of comics shows.
Posted by Unknown at 9:35 AM 4 comments: 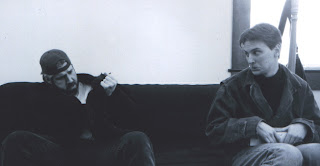 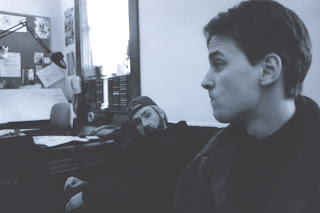 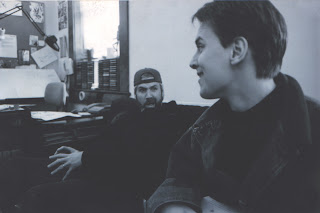 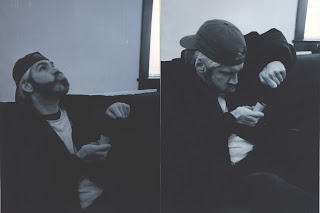 Was originally going to post these last week, but they just didn't seem to match with the things I was writing, my memories of Mike and how great a guy he was. I did bring them to his memorial though, and afterwards, sharing stories in the pub, passed them around. We all got a good laugh out of them. Mike was such a character anyway, and here he is in character, posing as a bum for me to use for the Preacher Special starring Arseface, along with Casey Jones. Note that Mike's using a lead pointer as a crack pipe here...
Posted by Unknown at 12:19 PM 3 comments: 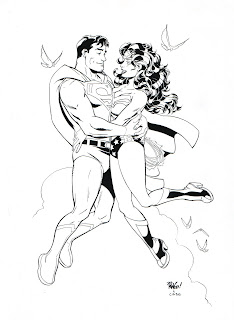 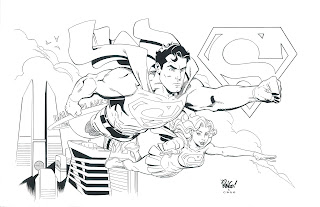 These are the last two images I inked of Mike's pencils, done a couple of years back now. The latter one with Supergirl is my favorite of anything I ever inked of his, the one where I most closely got to "nailing" it, at least in my mind.

It had been a few years since I 'd inked some of his work when I worked on these, and it quickly came back as to what a pleasure inking Mike's stuff was. His pencils were so tight and fluid, and had so much character to them. I wish I had copies of the pencils themselves to post alongside the inks.

These were done for our friend Wally who we'd played softball with years ago, and who would still come out to visit us in the waning days of the studio to see what we'd been up to, and to go enjoy some awesome jambal-AYAHHH! with at Tupelo's in Hillsborough. Memories we both shared at Mike's memorial service last Friday.

Speaking of... it was great to see everyone who could make it to the memorial. It seemed to help, getting together to remember Mike, and to share some of the ridiculous and moving stories that we all had of him. My thoughts and prayers continue to turn toward his parents, Matt, Suzanne, and to Todd.
Posted by Unknown at 10:44 AM 3 comments: 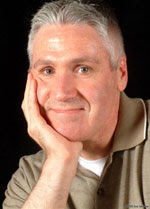 I'm one of the lucky ones. I had the great opportunity to work with Mike day after day for nearly 10 years, to see him grow into the great artist he became, and to become the best of friends.

He was always so encouraging, always giving other artists a boost, or giving the kind of great constructive criticism that made you want to make it work. Because he loved the art of comics so much, and really appreciated when the efforts paid off. Here's a sample email from Mike, after I started working at Red Storm but was still finishing comics commitments by night, and we were like ships passing at the studio, checking out what we'd done during the other's shift...

I checked out the page you did yesterday--

Man, it's really awesome...! I know you already had the layout done, but
did you trace that entire thing up in the brief time you were here
yesterday? If so, that's really impressive. I love all the added texture
and lighting you added from the simple layout you had.

I'm starting to really enjoy -- (although I still don't LOVE the work I'm
producing I don't HATE it like a lot of the stuff I've done in past)--
working really quickly. Not laboring over things and drawing them in a
quick and gestural manner seems to help bring out stuff that I never did
before.

That's what I see in what you're doing too. Is it because we're older and
wiser...? Or we just don't give as much of a shit anymore...?

We used to talk about stuff like this all the time. Talked at length about artists work we'd just discovered who embodied the energy and comprehension that really made a comics page sing.

I was lucky too, to have had the opportunity to ink Mike on his run of Sensational Spidey, and to meet and befriend Todd along the way. Mike made inking a pure joy, every line made for a reason, full of energy and character. To capture such personality with so few lines is deceptively tough, but Mike made it seem so easy. I think largely due to the fact that he was so empathetic, so compassionate, and had such a great feeling for the dramatic.

His compassion for animals is well known, by any that read his blog. His love and dedication to his cats. But also to all animals. The reason he chose to stop eating meat, was more a decision about why no animal should suffer for him to sustain himself, than it was about health reasons. In the last couple of years at Artamus, one of the other tenants would sometimes bring her dog Moe upstairs. This quickly became a highlight to our day, when we heard the tippy-tap of dog feet on wood flooring, and we'd yell out "Moe-bus!" as he stuck his head in our door. Mike always had a bag of treats for him, and he'd hang out with us for part of the day. And when my dog Nugget died, you'd have thought it was Mike's dog that died that day.

I know its a cliche, and I've heard many people say this this past week, but he was like a brother to me. We had our own short-hand language, catch phrases we'd repeat ad infinitum that just got funnier with each repetition (at least to us it did). We would listen to books on tape together, our stories, and sure enough there'd be another expression that would become part of our repertoire. If we were working on Sunday we'd listen to the Panthers games, and I'm glad he finally made it down to Charlotte to see one live. I watched Super Bowl 38 with him at his house, thinking it would be just another boring Super Bowl except for the commercials, and wound up watching the most exciting one as the Panthers and Patriots bounced back and forth in the 2nd half before Vinatiri ended our dreams of a Carolina win.

Its amazing how many brothers Mike had in this way, and its a true testament to him.

Mike was there to see my kids when they were a few days old, to see them grow up and was always happy to see and joke around with them.

He was the one that called me at the studio the morning of 9/11, and we watched the towers fall on my little b/w tv, filled with disbelief, anger and shock.

Which is how I've felt most of this past week. Still can't process that he's gone. Angry because I want to understand how it could happen, but it doesn't change the fact that he's not just a phone call or drive down the road away. 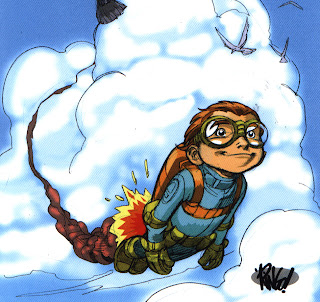 I can't even believe I'm typing the above words. Doesn't seem possible that Mike's no longer with us. He was like the art brother I never had, working side by side each other for nearly 10 years, someone who could give me honest feedback, and be so encouraging. There are few people that I've been as close to, that we had our own short-hand language and catch phrases that would start us down a whole line of tangents before bringing a conversation back 'round to what we were talking about in the first place. Few people could make me laugh like Mike could, and I'm sorry that more people couldn't have known that side of him. He was one of the most generous and compassionate souls that I've ever met.