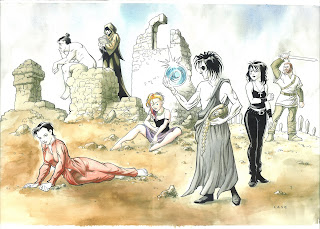 The Endless... for a while I'm sure James thought he'd have to wait endlessly (har, har) to finally see this commission, but it's finally finished! Thanks for your patience, James.
Posted by Unknown at 6:12 PM 4 comments: 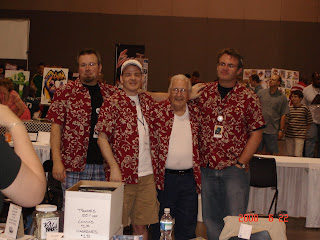 The Brotherhood of Mike! Craig, Todd, Nick and Matt, displaying their swanky new uniforms. It was great to see these guys together, and seeing everyone get together to help with the 'Ringo scholarship that Matt and Suzanne has started in Mike's name. 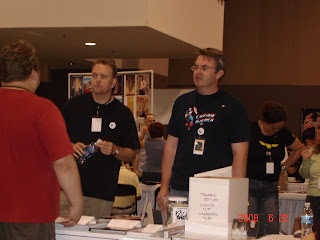 Another shot with Jeff Parker and Matt, and is that Chris Kemple talking to these guys? Looks like it is! And Suzanne in the background doing the real work no doubt. :)

Big thanks to everyone who came by the Hero Initiative booth while we were doing the big group signing. I tried to look up and thank everyone, but I know that there were times after a while I was just making sure I was still spelling my name right. So, if I was looking down while you passed by, please know that it was not an attempt to slight you.

Thanks also to those who came by and picked up a new copy of Rhomble #2, and to all who were patient enough to wait while I did sketches for them, especially Billy, Drew and Ed. And of course, to James, who has waited patiently for years (literally) for me to finish a painting of the Endless for him. I'll post a copy of it soon for others to see.

It was great to meet a number of folks for the first time, (Emilio!) and of course to catch up with some old buddies. Nathan, thanks for sharing some space. And of course, big thanks to Shelton for continuing to run the best Comics Show Around!

Hope to see you there next year!
Posted by Unknown at 6:27 PM 5 comments: 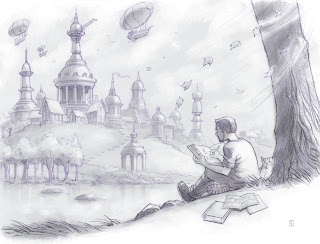 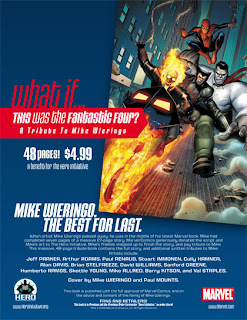 So, this upcoming weekend is Heroes Con. The only convention that I've continued to appear at over these last, gosh, is it really 18 years? The friendliest and most welcoming show I've been to, which is a testament to Shelton Drum and his wonderful crew for putting this show together year after year. Every year its a great experience, reuniting with friends, meeting artists I loved as a kid, and chatting with great fans.

This year of course, there's another aspect to the show that will be apparent throughout the entire weekend. Its the first one since Mike died last year. Because Mike loved this show so much, its been cause for a number of tributes and rememberances to be launched this weekend.
The first is the What If story that Mike was working on at the time of his passing, with a few of Mike's talented friends finishing the story that former Artamus mate Jeff Parker wrote. Along with the story, a few other friends wrote or drew tributes to Mike. Above is mine. I know Todd posted this piece a while ago on his blog site, but I wanted to wait until it was nearly launch time to share it here. For obvious reasons, it was one of the hardest pieces I've ever worked on, because it was so personal, and yet at the same time, I wanted people to read their own personal memories and feelings for Mike into this piece.

Here's the press release for this book:
When artist Mike Wieringo passed away, he was in the middle of his latest Marvel Comics book, a What If? story. Mike had completed seven pages of what became a massive 27-page story. With Mike’s passing, Marvel Comics generously provided access to the script and Mike’s art to The Hero Initiative, and Mike’s friends stepped up to finish the story, and pay tribute to Mike. Now, What If…This Was The Fantastic Four?: A Tribute to Mike Wieringo is a massive, 48-page tribute book that contains the full story, and additional written tributes to Mike.

Stop by the Hero booth to obtain your very own copy before it is available everywhere on June 25th. The book retails for $4.99. In addition, the following ten talented men will be signing the book at HeroesCon: Richard Case, Todd Dezago, Cully Hamner, Stuart Immonen, Barry Kitson, Nathan Massengill, Jeff Parker, Val Staples, Mark Waid, Karl Kesel and Matt Wieringo so don’t miss out on this once in a lifetime opportunity!

“Thanks to Marvel and The Hero Initiative, Mike’s friends got to work with him one more time and I get to experience seeing one of my brother’s comics on the stands again. That’s a thrill I never again hoped or expected to have. And it’s for a great cause that Mike would have been proud to be a part of,” said Matt Wieringo.

In addition, Shelton asked Todd to help put together a tribute sketchbook, which will also be available at the show that will raise proceeds for the ASPCA, another cause that Mike strongly believed in. I'll try to post more on this as I find out more details, as they're putting the finishing touches on this book as I type this. 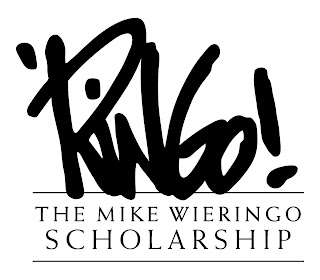 This was just announced, but I'm including it here too:

CHARLOTTE, NC (June 6, 2008) When Mike Wieringo abruptly passed away last August, the comics industry lost more than a great artist and creator – it lost a friend. Now, Mike’s family has teamed with the Savannah College of Art and Design to create The Mike Wieringo Scholarship or “The ‘Ringo” to help keep his spirit of generosity alive.

Created by Mike’s brother Matt and his sister-in-law Suzanne, the ‘Ringo is designed to help provide similar help to artists at the Savannah College of Art and Design or SCAD. Domestic and international students with have a minimum 3.0 grade point average who demonstrate financial need and display a serious interest in pursuing comics as a career are eligible. The scholarship will take effect in the artist’s second year of classes, and is renewable for up to two additional years, provided the student continues to meet the criteria.

The recipient will be chosen from three finalists determined by the college in a portfolio review by Matt and Suzanne Wieringo, along with a rotating group. The ultimate goal for the ‘Ringo is to raise enough funds so that it can cover a full year’s expenses at SCAD, approximately $30,000.

Toward this end, a table staffed by Mike’s family and friends will be set up in his traditional spot in Artists Alley at Heroes Con in Charlotte, NC. Heroes was a big part of Mike's life and career, and was the industry event he most looked forward to every year.

The table will raise funds through donations and the sale of remaining copies of Mike’s sketchbooks, copies of comics featuring Mike's work, selected pieces of Mike's original artwork, sketches by Mike's friends in the industry who will be appearing at the booth, and items donated by other comic professionals. Pros appearing include Jeff Parker, Rich Faber, Craig Rousseau, Todd Dezago, Mark Waid, Richard Case and more to be announced.

“SCAD is one of the most impressive programs in the world to focus on the medium of comics,” says Jeff Parker, creator of The Interman and Agents of Atlas, who worked with Mike at Artamus Studios. “I'm pretty sure Mike would have loved to have attended such a place in his student days. It would make an excellent legacy for him if we can grow the Ringo scholarship into a launch pad for the future greats of comics.”

Despite his success on such books as The Flash, Fantastic Four and his own creator-owned Tellos, Mike Wieringo never forgot what it was like to be a struggling creator. For many up-and-comers, Mike served as a mentor and friendly voice, whether it was providing free covers, advice, or just the encouragement to keep going.

With your help, the Mike Wieringo Scholarship can continue to grow and help a new generation of creators get the training and connections they need to start their careers. Mike’s talent, enthusiasm and generosity inspired many in the comics industry to be their best as both creators and as human beings. With your help, Mike will continue to be an inspiration for creators in decades to come.


Looking forward to seeing everyone at the show! I'll be there Saturday and Sunday.
Posted by Unknown at 12:18 PM 5 comments: 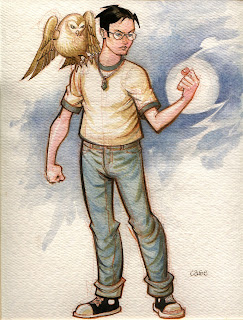 Dug up an old Tim Hunter and Yoyo painting I did back in 2003, right around the time I was finishing my run on Hunter:Age of Magic. Unseen by few until now!
Posted by Unknown at 9:12 PM No comments: 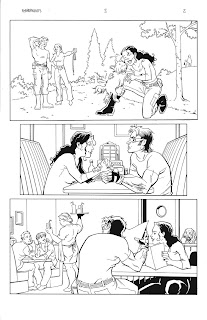 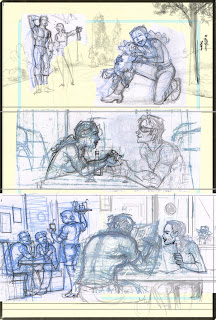 Oh yeah, forgot to mention that Perhapanauts 2 came out a week or two ago, so if you haven't run out and picked up a copy, do so this week (if your local shoppe still has copies, that is..) I did a short back up story, but of course the real reason to buy is for the other-worldly goodness that Todd and Craig bring to the table EVERY MONTH!

Here's a look at both roughs and finishes of one of my pages. Different technique for me in laying out this page, as I worked up the gestural sketches right on the script, and put the pages together in photoshop before transferring them onto boards and inking them up.
Posted by Unknown at 10:25 AM 4 comments: