While not my original intention for this commissioned sketch, this one kind of developed into a strange sort of homage to The Little Mermaid's Ariel.  I think it started when the fish on Delirium's string started reminding me of Flounder...  I don't know. 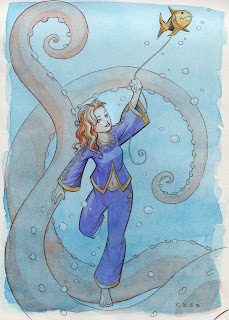 Also of note- this was done in a Moleskine watercolor sketchbook, and I loved the feel and texture of the paper.  Note to self- get me one of those!
Posted by Unknown at 11:48 PM 6 comments: 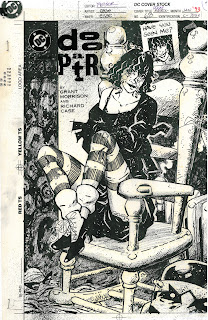 Cover to Doom Patrol No. 63, Grant Morrison's final issue, as well as Crazy Jane and Rebis's.  One of my personal favorite issues.  From 1992, nearly 20 years now.

Looking back on these reminds me how much building of texture I was really into exploring in my inking work then.  Drybrush, litho crayons, spatter and liquid frisket to preserve the white of the paper are all on display here.
Posted by Unknown at 8:25 PM 8 comments: 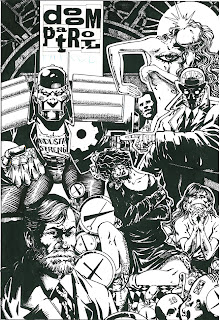 Posting my latest DP piece got me all nostalgic to look over some of the old work, some of which I still have in its original state.  Thought that it would be interesting to post some of the old stuff while working on more new stuff so that this site didn't sit quite so empty this year like it did this past year.

So, this is the piece I did back in 1991 for Who's Who in the DCU #15.  This issue turned out to be the "Vertigo" issue of Who's Who, before there was a separate Vertigo imprint.  It featured characters from books like Sandman, Hellblazer, Shade the Changing Man, Swamp Thing, Animal Man and Doom Patrol, that went on later to become the core monthlies that at the time were branded as the "darker" mature titles at DC.  Within a year or two the Vertigo imprint was created.

Anyway, I finished this piece just before Heroes Con that year, and knowing that editor Michael Eury was going to attend, brought it along to give him to take back to New York with him.  As I handed it to him he thought about the idea of using it for the cover of the issue as well, and sure enough, it was the image that was used.

PS- Can anyone name all of the characters in this shot?